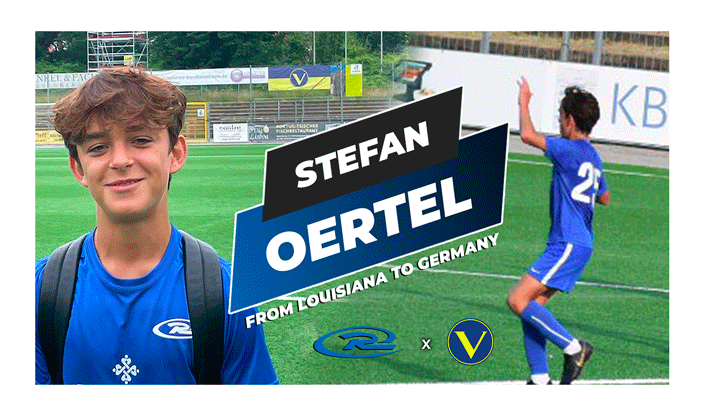 Stefan Oertel isn’t one to pass up an opportunity, even if it means moving halfway around the world for it.

The 07 Cajun Rush player recently relocated to Germany to play for the SC Victoria Hamburg youth team for a year, taking advantage of a Rush partnership with the German club.

“My family travels to Germany every summer to visit my grandmother,” said Stefan, who plays on a Rush regional Select team. “So, I asked my home club, Cajun Rush, if I could get an opportunity to play with the team in Germany because I wanted to see how it compared to back home.”

Just a week into training, Stefan is finding just how different—and grueling—the Victoria Hamburg training sessions can be.

“We’ve been running several 10Ks a week to get in shape,” he said. “In the training so far, it’s mainly been about technical ability and decision-making and more conditioning.”

And that pairs nicely with Stefan’s goals for the next year when it comes to improving his game.

“I really want to improve my overall game in every aspect, like technical ability all the way to my soccer IQ,” Stefan said. “I think, especially in decision-making. I’ll be able to get a lot better here because it’s a lot faster. So, you have to start thinking faster to get one, two steps ahead.”

Stefan has been on a steep learning curve since arriving, managing a new culture and a new language while trying to adjust to the German style of training and play.

“We did this drill where everybody had a bib with two different colors on it, and then there were mini goals with cones in them,” Stefan said. “And based on the color coordination, you had to score in certain goals and play with certain people. So you really had to use your brain.”

But Stefan’s also found quickly that the element of fun is universal.

“Just like in America, they’re still wanting to have fun while getting better,” Stefan said. “It’s not just win, win, win. You still have fun. Like one drill I thought was crazy was when they put a blindfold on us and had the other players conduct us to dribble through some cones.”

Stefan has already started language classes and will be attending a German school in the fall. Though he’s excited about the chance to play in Germany, there are some facets of life in the United States that he misses.

“I’m definitely missing my family, my old teammates, my friends,” Stefan said. “But I’m really missing my mom’s cooking because she’s the best cook. And here, the food’s not the same.”

But it’s something Stefan’s willing to endure as he chases his dream of one day playing professionally.