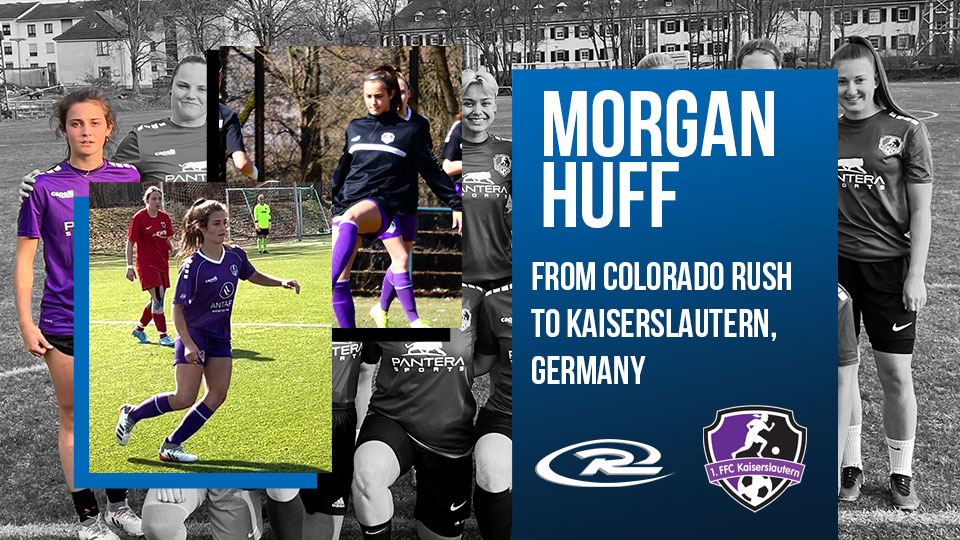 With aspirations of playing professionally, Morgan Huff was eager to get a taste of playing in Europe. And when the opportunity recently arose, she jumped at it.

Huff, an 05 player with the Colorado Rush club, is spending her spring season with the FFC Kaiserslautern U17 team. The club’s women’s team has signed Rush alum in the past, but this was the first time it invited a youth player to join one of their teams.

“The club reached out to Rush and was looking for some help to get promoted into the highest level of German youth soccer, so when they asked me if I was interested, I was ready to go,” Huff said.

It took her a couple of weeks to find a rhythm with her teammates, but she quickly found some chemistry.

“It was kind of a hard transition at first, but I got used to it and feel like I’m doing a lot better with it now. This experience is definitely something that’s going to develop my soccer IQ and help take me to another level by being able to understand teams and other players much better and adapt easier.”

She’s also had to adjust to a different style of play.

“They play a lot more risky soccer than we play in the U.S.,” Huff said. “They push more players up top and depend on just one or two players at the back to defend against any counters. But they want you to try and shoot more and drive at players. They really want more individual effort on the ball but still play a lot of ball into the middle from crosses, which is similar to what we do at home.”

Huff, who is staying with her mother in an apartment provided by the club, has taken a little longer to adjust to the language. And her first name—which is also the German word for “morning”—has created some amusing situations.

“I’m just now learning the basics of German,” she said. “And I’m trying to connect with the girls, so I’ve sometimes heard them saying what I thought was my name and wondered what they were saying about me. But then I’d ask what was going on and I’d find out they were just talking about what they were doing that morning.”

Aside from the language barrier, she’s finding the experience to be a valuable one.

“It’s a little different visiting a country as compared to living in a completely different culture,” she said. “We’ve had to learn how to navigate the public transportation system here, which is different. And grocery shopping can be a challenge too. But this is going to help me in the future being able to adapt wherever I end up playing if I play outside the U.S.”